The site has been under continuous occupation since Mary and Richard Keith Call first acquired the land - originally 640 acres - in 1825. In addition to the ca. 1840 Call-Collins House and the ca. 1940 Burr Cottage, there is also a family cemetery on the property, in use since the early 1830s. 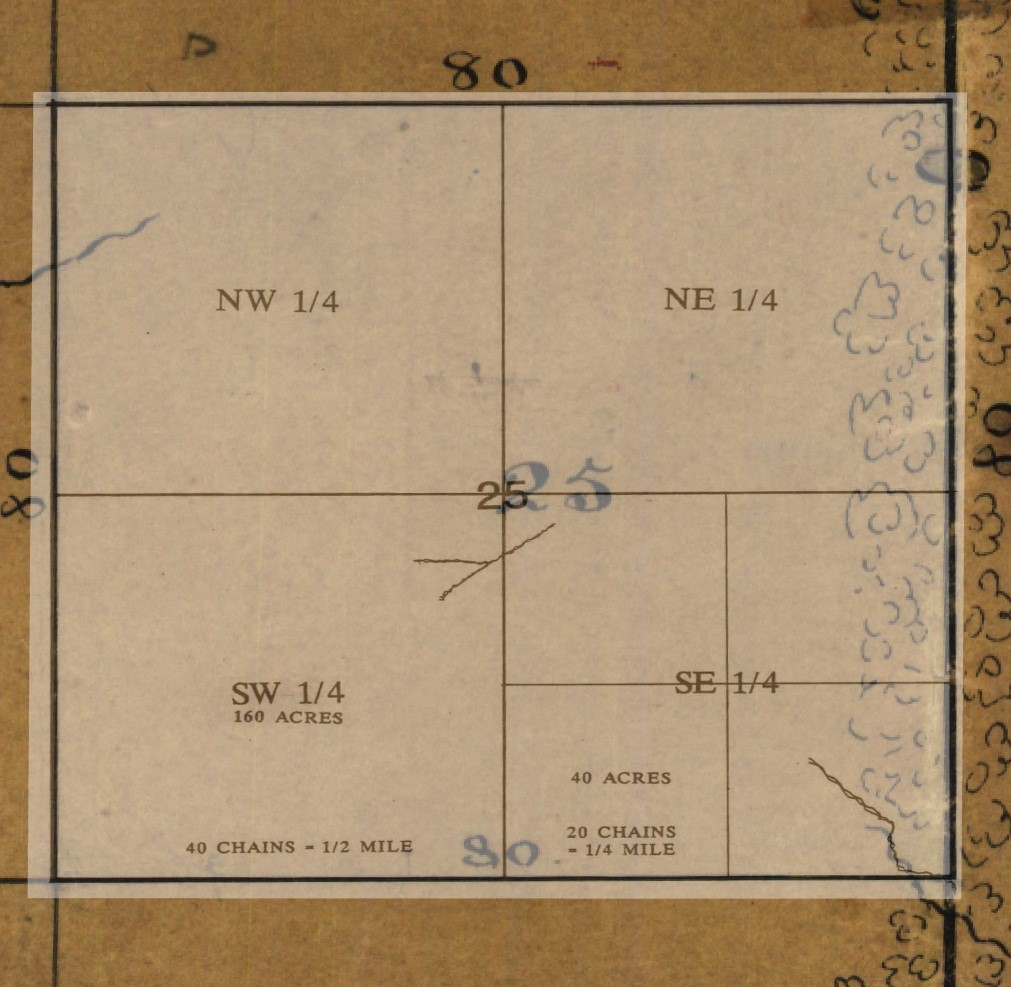 Map showing section 25 in township 1 north, range 1 west. The Calls purchased all of section 25 in 1825. The Call-Collins House is located in the southeast quarter. Extant plat maps provide few details about the land, except for the presence of tree hammocks containing pine, oak, and hickory along the eastern property boundary, and small streams running from northwest to southeast (TGAR).

Archaeology at The Grove to date has yielded many clues about the lives of the people who lived on the site. However, much work remains to be done. Many important details about The Grove’s built environment, such as the location and dimensions of an earlier wood-frame house, the location of dwellings inhabited by enslaved people, and other buildings and structures that pre-date the 20th century, remain unknown.

As a National Register of Historic Places-listed site and a state-owned property, The Grove and its surrounding landscape are protected by Chapter 267 of the Florida Statutes, which established historic preservation stewardship as a policy of state government.

State law provides for the review of any work which might adversely affect historic resources and entrusts all archaeological artifacts recovered on state property with the Division of Historical Resources (DHR), Bureau of Archaeological Research (BAR). As such, BAR monitors ground disturbing activities at The Grove and produces reports to detail findings.

The first archaeological study conducted at The Grove occurred in February 2004, when BAR monitored the installation of underground cable. Archaeologists noted the presence of several ceramic artifacts and a dark stain in the soil indicating an area where brickmaking possibly took place.

In August and September 2011, BAR monitored the installation of new underground utility lines. Archaeologists found a large number of ceramics and glassware spanning much of The Grove’s recorded history, from the mid-1800s to the 1900s. 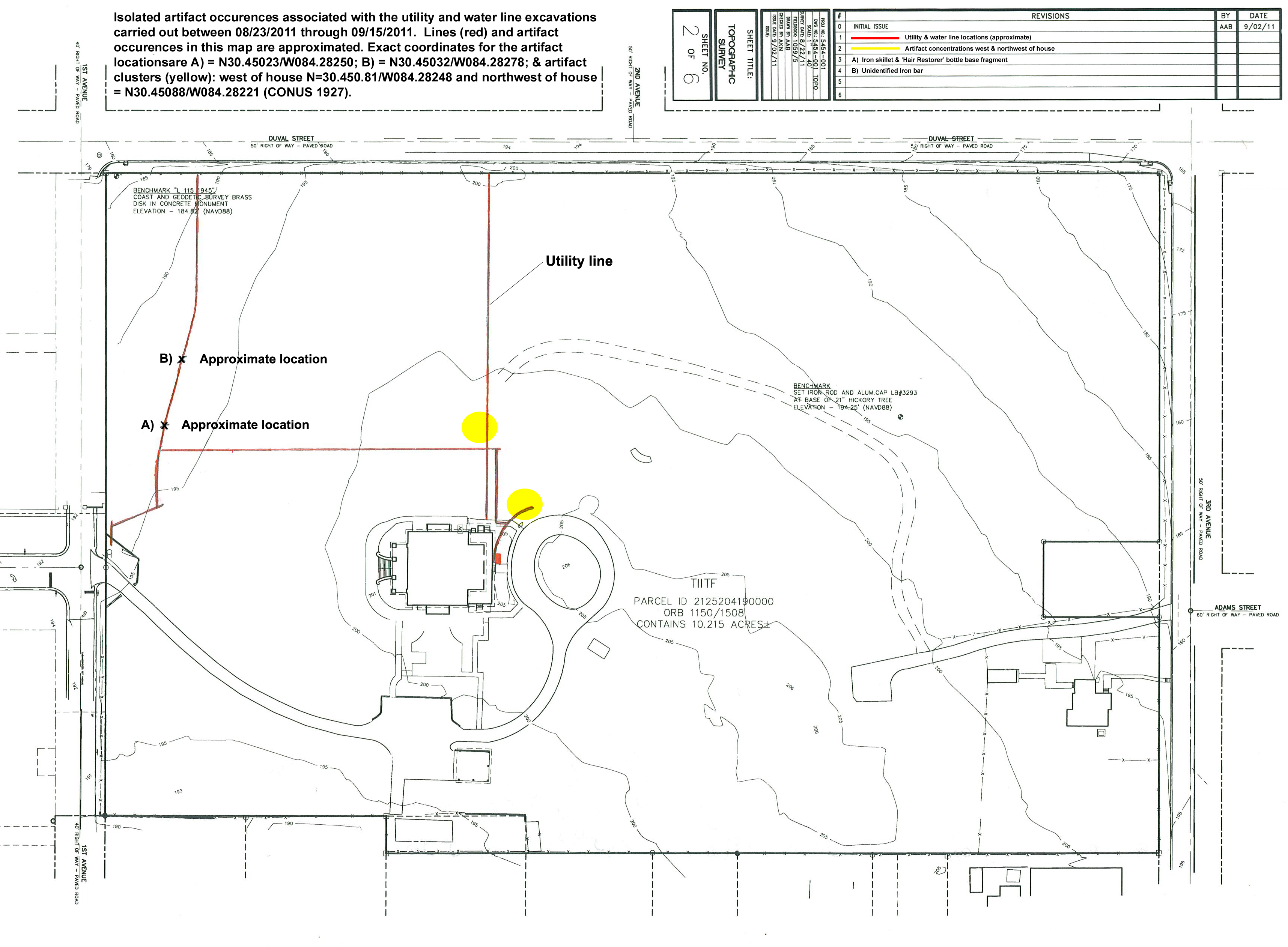 Site plan for The Grove showing the location of utility line installation monitored by archaeologists in 2011. Areas highlighted in yellow indicate artifact concentrations. Site plan adapted from a survey by Nobles Consulting Group, Inc. and included in TGAR.

In December 2011, state archaeologists monitored drainage system installation, which yielded more artifacts, including parts of a porcelain candle holder and remnants of a sand and oyster shell driveway dating from the early 1900s. 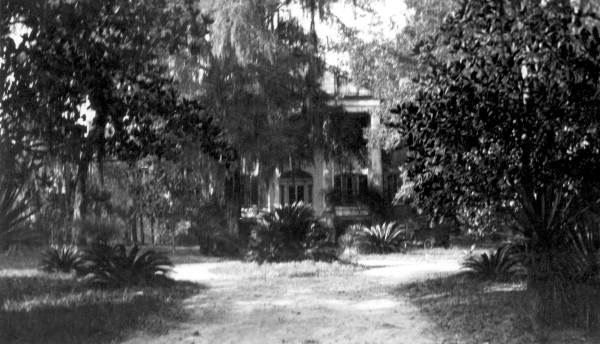 Richard Keith Call owned a steam-powered brick press by the early 1840s. At that same time, he also owned at least five brick kilns containing 200,000 bricks each. Call’s brick press and all five of his brick kilns would have been operated by enslaved craftspeople, who produced the bricks used to build public and private structures throughout Tallahassee.

Owing to firing technology available at the time, small pieces of coal known as clinkers were added into the aggregate as a tempering agent to help heat the bricks hotter and faster in order to make them stronger. The original bricks also show variation in color, the result of uneven firing and natural variations in the clay used. As kiln technology improved by the end of the 19th century, bricks became much stronger and had a more uniform appearance.

Additional construction activities on the grounds revealed two small brick formations. The first of these was found in 2013 during the construction of a drain and swale connected with the cistern restoration. This feature appears to be the floor or foundation of a small building used for unknown purpose. The bricks found in this feature are contemporary with the original portion of the Call-Collins House and are similar in size and composition.

The second feature was found in summer 2015 during the removal of invasive plant species along the eastern property boundary. These bricks were also from the 19th century and their layout suggested use as a walkway, with the pattern closely matching existing pavers near the Burr Cottage.

Without additional artifacts to provide further context, and given the lack of concrete evidence in the historic record, the exact date and purpose of these features is a matter of conjuncture.

In July 2012, construction workers came across two headstones under the east covered entrance to the basement, while excavating to install cistern outflow pipes.

The two headstones found at The Grove were likely discarded and replaced with newer ones at the location where the individuals remain buried today. Excavations in the same area also revealed four bases for tablet style-headstones which were left in place, since they were not inscribed. 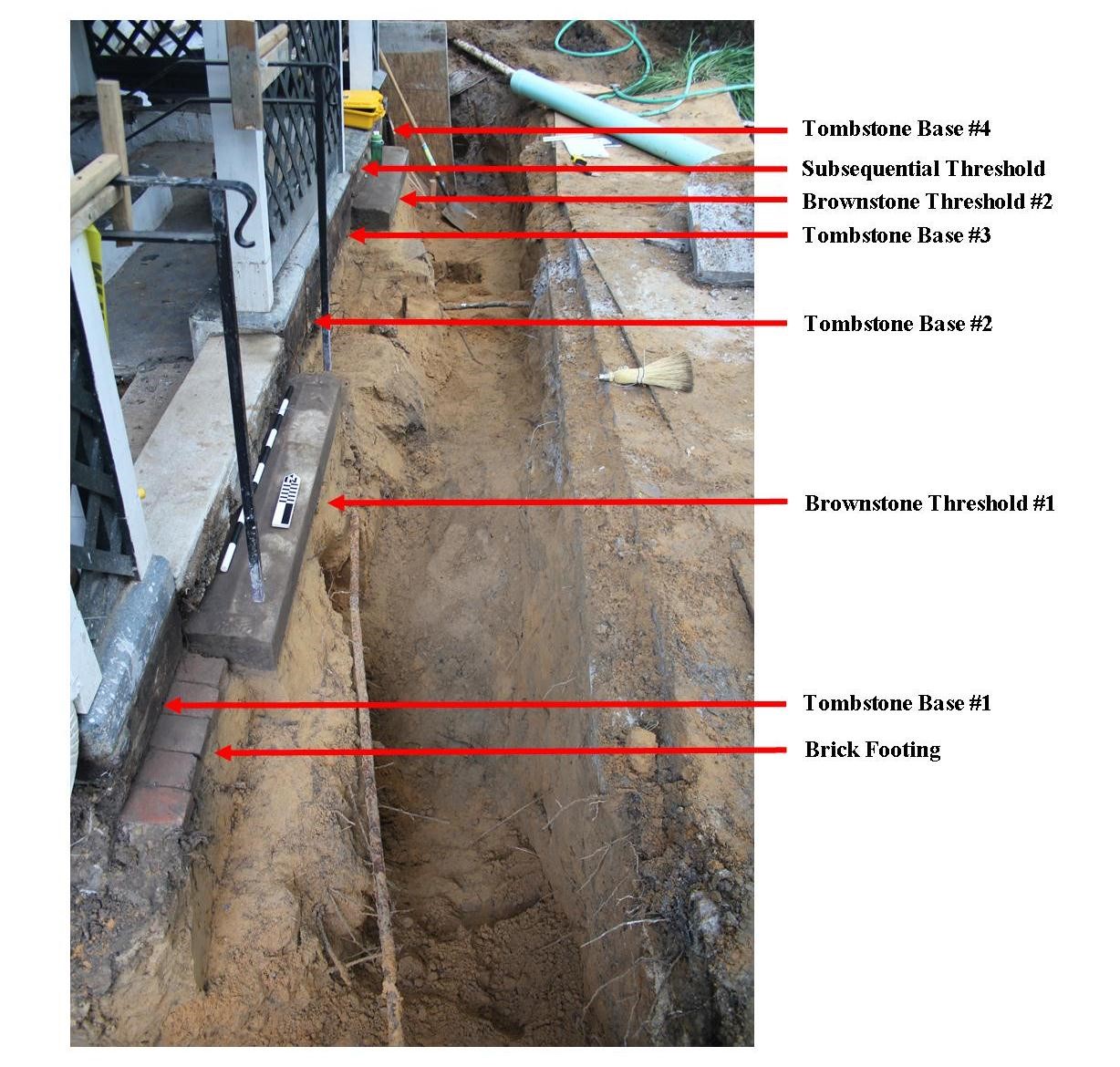 Excavations related to the cistern restoration revealed that discarded headstones were re-purposed as footings for a wooden addition built in the 1940s along the east and west elevations of the Call-Collins House (TGAR).

Archaeology assisted tremendously with the rehabilitation project. Perhaps the most notable example is the historic cistern.

During the second rehabilitation phase in 2011, contractors discovered brick trenches during structural stabilization in preparation for the excavation of an elevator shaft. These trenches led to an abandoned masonry cistern, which was contemporary with the oldest part of the house.

The excavation of the cistern began in May 2011. Due to fears of noxious gases trapped inside the bell-shaped structure, BAR excavated the cistern in an unusual manner. Construction workers lowered and raised a single bucket through the cistern opening and archaeologists sifted through the debris above ground.

The cistern is constructed of brick contemporary with the adjacent house and lined with plaster on the interior. This and other cisterns and water collecting devices provided water for residents until city lines reached the property in the early 20th century.

The cistern essentially became a garbage pit shortly after it was no longer used for its original purpose. As a result, archaeologists uncovered many 19th and 20th century artifacts, some of which are currently on display inside the museum. Among the artifacts found were military dog tags, glassware, ceramics, and toys.

The project team decided to re-purpose the historic cistern as part of the modern irrigation system. This was done with the goals of alleviating dependence on city water, to adapt and reuse an existing structure, and contribute points towards LEED certification. New downspouts connect to the cistern underground. A pump system then feeds collected water back into the irrigation system. During the installation of the new equipment, BAR also excavated the cistern’s filtration box, which used charcoal as a filtering agent for potable water. 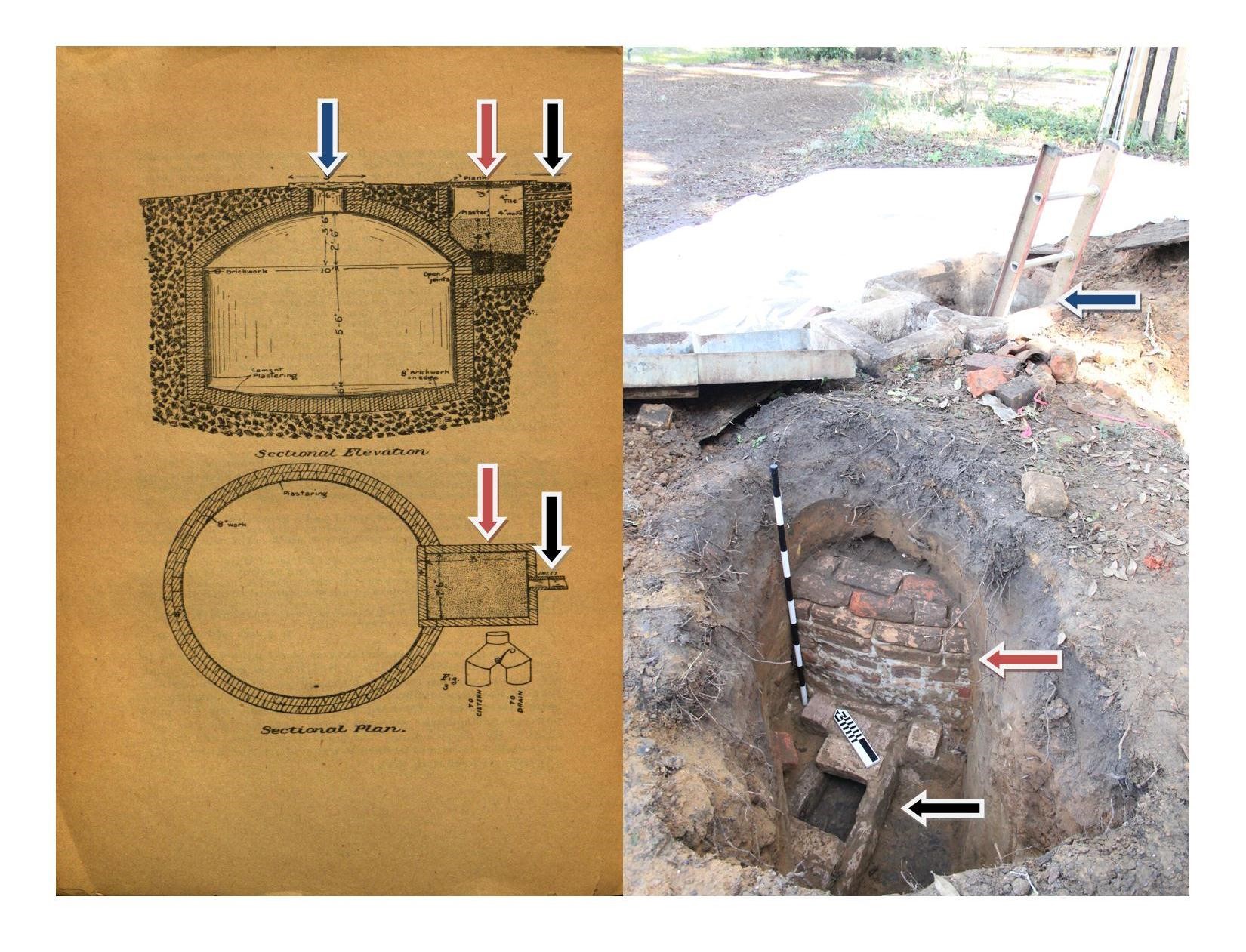 Diagram of a typical 19th century cistern (left). Photograph of the cistern during excavation (right). Note that the arrows on the two images indicate the filtration box and the top opening of the cistern (TGAR).

Due to the expensive and time-intensive nature of fieldwork, archaeologists rely on a variety of surveying techniques, supplemented by historical research, to help evaluate and prioritize sites for excavation.

GPR units operate by transmitting distinct pulses of radio energy from a surface antenna, which are reflected off of buried objects, features, or soil structure, and then detected back at the surface by a second receiving antenna. GPR systems are capable of producing three-dimensional images of the subsurface because feature depth is determined by measuring the round-trip travel time (in nanoseconds) of the radar pulse before it is recorded at the surface. The survey at The Grove utilized a Geophysical Systems, Inc. SIR-3000 data acquisition system with a 400 MHz antenna.

The GPR survey identified a number of anomalies on the property, including suspected unmarked burials, utility lines, and possible structures. Imaging of buried features can be a difficult task. GPR units respond to more than archaeological anomalies alone, and the survey results rely heavily on recognition of patterns that correspond to the expected form of an archaeological feature. As a result, further excavation, or “ground truthing,” is needed to positively identify buried anomalies. 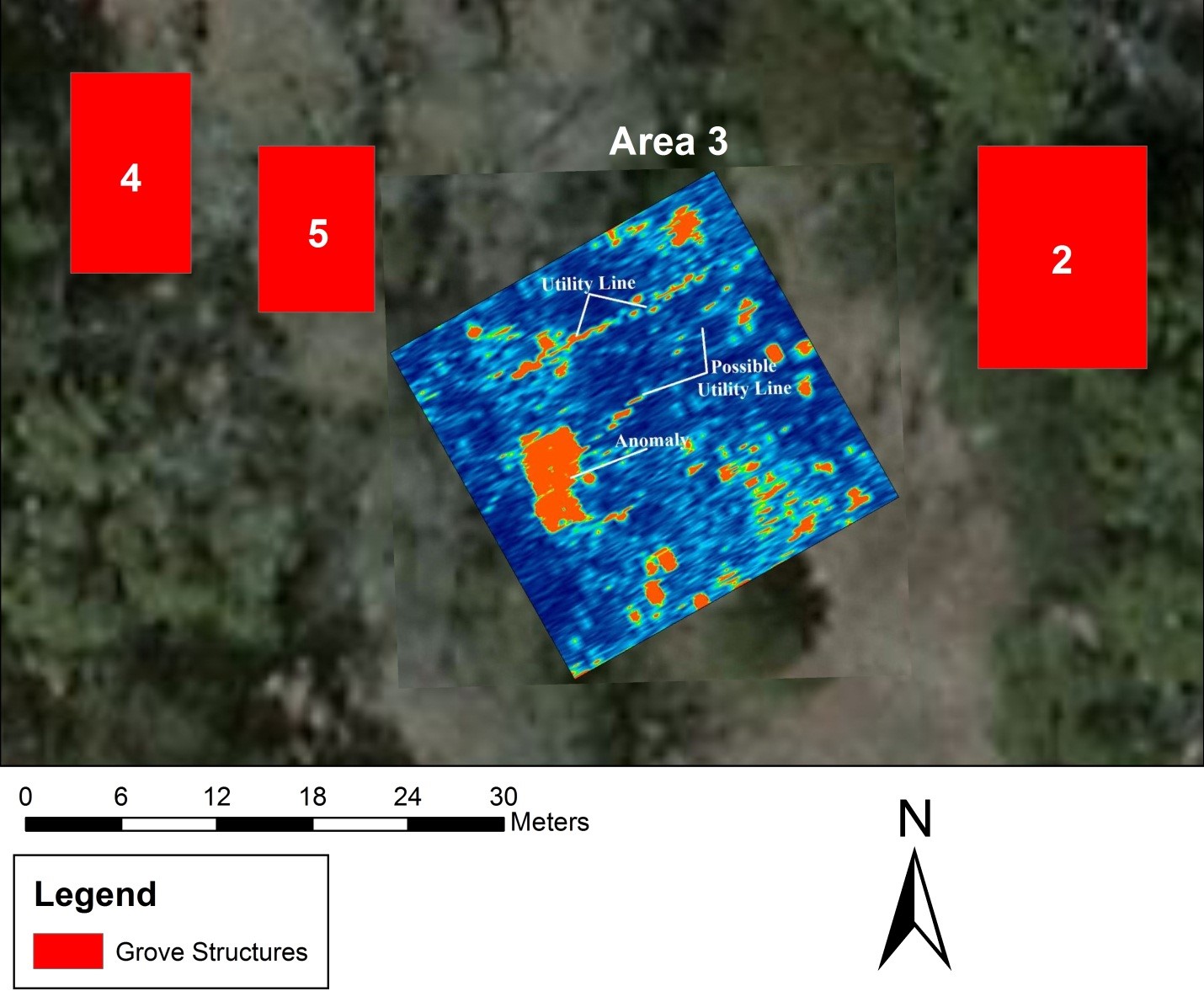 Map showing GPR results, including an anomaly north of the Call-Collins House (TGAR).

The traditional method of surveying archaeological resources is by digging shovel test pits (STP). STPs consists of a series of measured holes dug to a certain depth to determine the density and availability of artifacts. The artifacts are collected as the dirt or soil is placed on a sifter and filtered. Archaeologists then evaluate findings to determine the suitability for further excavation.

From October 2011 to February 2012, BAR, accompanied by volunteers from the Panhandle Archaeological Society of Tallahassee (PAST), undertook Phase I of an archaeological survey of the property.

Shovel testing hoped to further delineate potential historic resources noted in past fieldwork, including the GPR reports. Test areas were selected based upon previous surveys, metal detector hits, and in open spaces where the ground appeared undisturbed by modern activities.

Shovel tests identified over 1,900 artifacts, including a bottle dump site from the early to mid-1900s. The shovel tests also found evidence of prehistoric occupation. The vast majority of artifacts consisted of ceramics, glass, metal, and brick postdating the Call family's occupation of property in 1825. The artifact distribution reinforced some of the known or suspected sites of 19th and 20th century outbuildings. 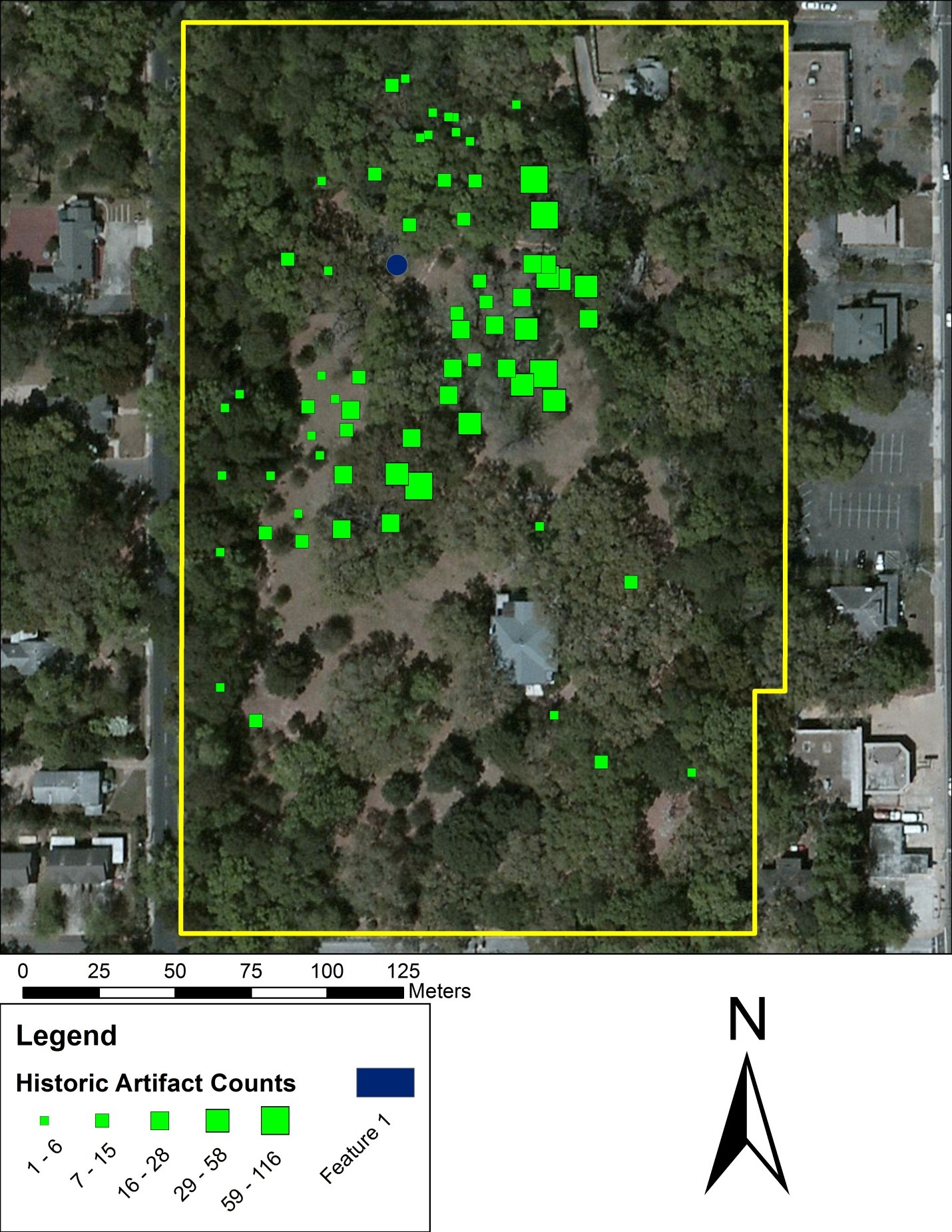 Map showing the distribution of historic artifacts on The Grove property, based on archaeological surveys (TGAR).

Despite the number of artifacts collected and survey work already completed on the property, much work remains to be done.

In addition to belowground anomalies identified in previous investigations, at least two small brick features on the site, built and used for unknown purposes, contain brick dating to the mid-1800s.

In combination with historical research, archaeological investigations have great potential to shed light on The Grove’s enslaved community. The full extent of burials in the family cemetery also remain unknown.

Research is ongoing and The Grove Museum looks forward to future projects working with professional archaeologists and volunteers.

To get involved in public archaeology, visit the Panhandle Archaeological Society at Tallahassee (PAST) at http://fasweb.org/past/, or the Florida Public Archaeology Network (FPAN) at http://www.flpublicarchaeology.org/.