Built by enslaved craftspeople in the 1830s, the Call-Collins House at The Grove is a well preserved example of Florida's antebellum Greek Revival architecture.

Listed on the National Register of Historic Places in 1972, the site's historical significance lies not only in the age and integrity of the masonry residence, but more importantly, The Grove's history speaks to critical moments and major currents that define the American experience.

Between 2009 and 2017, the Florida Department of State (DOS) converted the property from a private residence into a public museum, fulfilling the wishes of the Collins family to share the site with future generations.

The project team - DOS, the Department of Management Services, MLD Architects, and Allstate Construction - are honored to have received recognition and awards from the Tallahassee Trust, Florida Trust for Historic Preservation, and the American Institute of Architects. More than 30 subcontractors contributed to and continue to support ongoing efforts to preserve the site and its history.

Leadership in Energy and Environmental Design

Built during a period when sensitivity to the environment was a necessity, the Call-Collins House at The Grove exhibits many techniques still used today for sustainable design. The project is one of a small number of historic house museums in the nation to attain LEED certification from the U.S. Green Building Council.

In 1985, LeRoy and Mary Call Collins sold The Grove to the state of Florida. They received a life estate and lived in the home until their deaths in 1991 and 2009, respectively.

Beginning in 2009, the Department of State initiated the first of three construction phases at The Grove. Working with MLD Architects, Inc. and Allstate Construction, Inc., the first phase enhanced protection for the historic home from severe weather by installing new storm shutters to replace unsalvageable existing shutters laden with lead-based paints. Equipped with impact-resistant fiberglass panels, the new mahogany shutters match the existing shutters, believed to date from the early to mid-20th century.

As the first construction phase began, appraisers evaluated the home and its historic collections. The assessment of the home’s value and the appraisal of historic collections to be acquired from the Collins family were critical steps in planning the museum and prepared the building for the substantial rehabilitation project ahead. 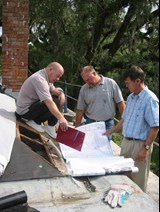 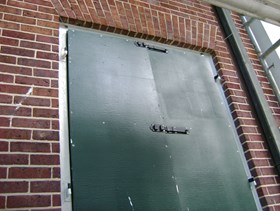 The second construction phase began in 2011 with a comprehensive structural assessment of the ca. 1840 masonry residence as well as the 1950s Florida Room addition built by the Collins family.

A year of study produced these findings and initiated the two-pronged approach to stabilize and repair structural elements while also making the building fully accessible by adding an elevator within the 1950s addition.

The elevator utilizes existing openings on all landings in order to minimize its impact on the historic building. Excavation for the elevator pit revealed brick-lined trenches leading to an original cistern.

The discovery of the cistern proved to be one of the most exciting of the project, as it yielded a variety of artifacts from the late 19th century through to the Collins period.

Downspouts from gutters on the north elevation, part of the 1950s addition, were connected to the cistern. Rainwater collected in the cistern is pumped into the irrigation system to provide water for plantings adjacent to the house, lessening the site’s dependence on external water sources. 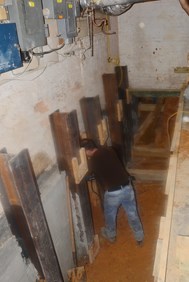 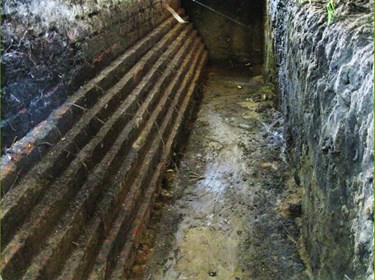 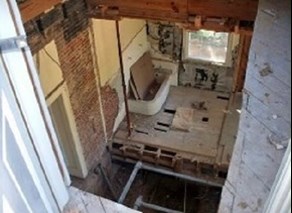 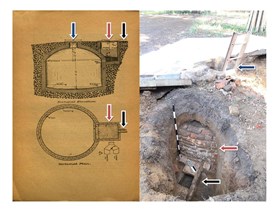 Stainless steel helical wall ties were installed at weakened points to provide additional support which, in effect, helped to stitch the building back together and mitigate nearly two centuries of settling. 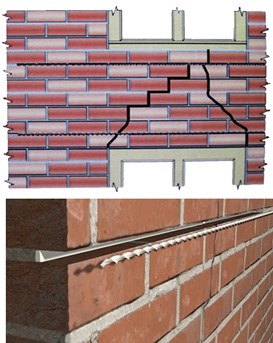 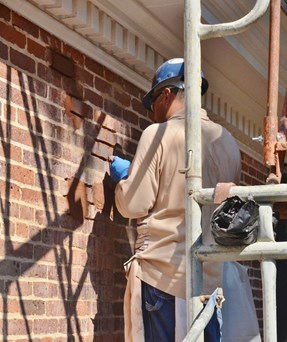 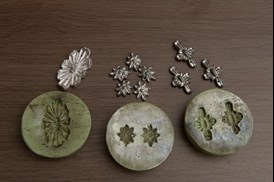 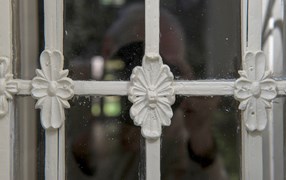 The plaster and lathe ceiling on the first floor was removed to facilitate the installation of HVAC, sprinklers, and a security system.

Repairs to historic plaster followed the removal of lead- and latex-based paints. The application of lead-based paints in the 20th century had unintended consequences for interior trim and the masonry building in general.

These paints had effectively prevented the passage of moisture through the thick masonry walls. As a result, moisture concentrated in the brick, lime mortar, and in wood trim, particularly window casings and lintels installed above exterior openings to provide support for the structure above.

The removal of casework around the windows on exterior walls revealed severely deteriorated original, heart-pine lintels, which were replaced with stainless steel beams to span the openings.

All casework was rebuilt to match the styles used in the original construction. 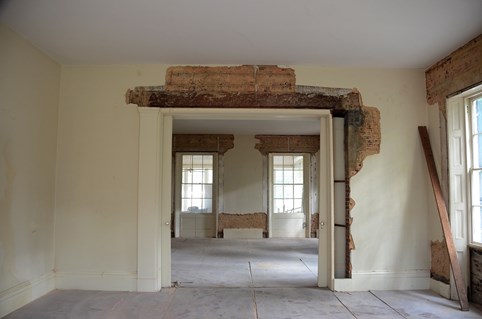 View from the parlor to the dining room with pocket door pediment removed, revealing the heart pine transom that spans the opening.

The final step of phase two included the application of a custom, proprietary mineral coating on the interior walls.

The mineral coating composition mimics the original type used on the walls and is essentially permeable paint, which helps to mitigate moisture retention by allowing the wall to, in essence, "breath."

Once the paint dried, work turned towards restoring the original pine floors. Light sanding and staining on the floorboards capped off the majority of work on the interior.

In addition to structural stabilization and masonry repair, and exterior and interior restoration, phase two also included comprehensive building systems upgrades, which ultimately resulted in the modernization of all plumbing, electrical, and HVAC.

The first floor kitchen, part of a 1950s addition by the Collins family, gutted for the elevator, was renovated with new appliances, cabinets, linoleum flooring, and paint.

Phase two also included extensive work on the grounds, including:

With rehabilitation on the house and historic Collins-era plantings nearing completion, the third phase focused on site protection and accessibility.

In 2015 and 2016, extensive exotic invasive plant species removal opened up the east side of the property to provide for a visitor entrance and a service road. New perimeter fencing replaced a damaged chain-link fence, accompanied by further invasive removal and new plantings.

Exotic invasive plant species control and the promotion of native plants, in keeping with the design of Mary Call Collins, informs the holistic approach to landscape maintenance and future plantings.

In 2017, new plantings introduced a variety of native species that provide food for both animals and people. In keeping with Mary Call Collins' design, all flowering plants produce predominantly white blooms. 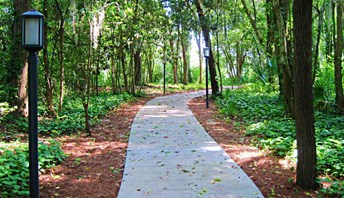 Left: View of west side of The Grove grounds. Right: Pathway between the main house and staff offices at the Burr Cottage.

Sustainability, historic preservation, and cultural history all inform the interpretation of the site.

Educating the public on the importance of community preservation - to support jobs, to minimize waste, to maximum historic resources, and to give a sense of orientation to our share heritage - is critical to maintaining the relevancy of historic sites like The Grove and to sustain these properties as a value-generating institutions for future generations.